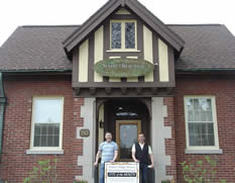 Located in the northeast quadrant of the village, this 1936 building is in the central business district in an area of mixed commercial and residential uses. This quaint, charming building was constructed in the ‘Tudor Revival’ style popular in the 1920-1940s. Looking like something out of a children’s story, it features half-timbered gables, diamond-paned windows and cast stone sills. Although modest in size, it is one of the most distinctive and immediately recognizable in the village. It’s the only commercial building in the village that is constructed in the early 20th century Revival style.

This building was opened for business on August 31st, 1936 when it became the new exchange for the Rochester Telephone Company’s service to the Webster area. At that time, there were 944 subscribers.

The Telephone Company continued to operate out of the building until 1961, when the new dial office at 833 Ridge Road was opened.
Subsequently, the building at 80 East Main Street was converted into offices for Barrett, Maier, and Barrett attorneys in the 1970s. To this day, the building functions as the Barrett Law Office, P.C. John M. Barrett is the first member of a third generation family of lawyers to practice in Webster.